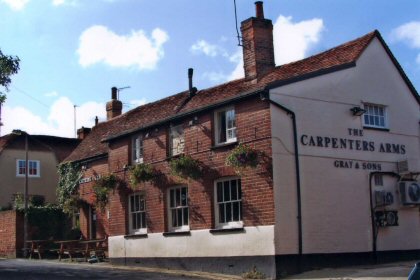 The Carpenters Arms in my home town of Maldon, Essex is one of my two locals. I have been an occasional customer on and off for over fifty years. I only made it my second home in 2008 when the pub was taken over by Richard Henfrey and his partner Jude. Richard went to school with my best friend and drinking buddy Colin Barrell. At that time neither of us had visited the pub for some time so when we heard Richard was taking over the reins of the best ‘drinking pub’ in the town we popped in. We’ve been popping in on a regular basis ever since.

Richard kept good beer including Adnams (Bitter and Broadside) and local brew Puck’s Folly (Farmers Ales, brewed just across the street), the company is excellent, the customer’s language is often colourful and the female bar staff amongst the most attractive and interesting I’ve experienced (only metaphorically of course) for some time.

Richard and Jude left the ‘Carps’ a few years ago but the pub is still worth a major visit. Things have certainly changed for the better.

But to the history of the place…

For this I am relying on two local sources; men who have sampled the sauces at The Carps (as it is affectionately known) for many years, namely Maldon historian Stephen P. Nunn (who also provided the external photograph of the pub) and Maldon’s beer and brewery expert Ken Stubbings. Both are friends of mine and have been regular drinkers at The Carpenters Arms over many years. Stephen introduced an ‘ale trail’ in Maldon in 2009 which begins at The Carps. Indeed Stephen credits this very pub as being responsible for weaning him on to decent beer. He told me recently, “I have the convivial surroundings and company of the Carpenter’s Arms in Gate Street, which I have enjoyed in the past with many pints of ‘Bob and Abbot’ [Gray’s (then Greene, King) strong bottled ‘Old Bob’ mixed with GK’s then strongest beer ‘Abbot Ale’] to thank for that.” As well as a good pint, the Carps also has an interesting history – an absolutely essential combination as far as Stephen is concerned. “To me” he said, “the low-ceilinged, warmly welcoming and dimly-lit bar epitomises the special heritage of the Maldon alehouse.” And so says all of me.

The original timber-framed building dates back to as early as the 1340s, when it was a simple open hall with a central hearth. By the late-17th century it formed part of a small-holding called variously ‘Pyersman Place’ and ‘Drakes’. In 1817 the parcel of land and the building that was to eventually become the Carpenter’s Arms was owned, perhaps rather surprisingly, by the Vicar of Heybridge (a nearby village), the Rev. Francis John Waring. In 1847 it was purchased by John Pitcairn of the Maldon Brewery (his brewery was only a few yards from the pub) for the princely sum of £211. Pitcairn carried out some major rebuilding work and then opened the property as a beer-house. According to Norman Barber the Maldon Brewery was acquired by Gray & Sons of Chelmsford ‘c. 1896’ and was closed in 1952.

Ken Stubbings’ research revealed that the small cottage that was to become The Carps was amongst orchards and gardens something so difficult to imagine today when the pub is surrounded by housing. Ken discovered that ‘after considerable alteration’ it became the brewery tap to Pitcairn’s business and was eventually given the name The Carpenter’s Arms. According to Ken the deeds of the cottage go back to 1684 but evidence in the form of timbers and roof tiles show that there was a cottage on the site as long ago as 1349 thus confirming Stephen’s assessment. Ken wrote in 1988, “This could give some credibility to the story that men who built the Blue Boar lodged there in 1350.” The Blue Boar, a former Trust House, is only moments away, its rear entrance being in same street nearly opposite the Carps.

As with all public houses, the Carps had a succession of tenants including Henry Smith in the 1860s, Edward Mead (from about 1874) and the Burrell family from 1908 right through to the late-1930s. Stephen recalls of his early imbibing days that “Jack Murphy’s reign was spoken of with great fondness, but I have special memories of Terry and Joyce Twohey, a very kind and tolerant couple who allowed us lads to treat it like our second home. There was a real buzz about the place, complete with music and laughter, Irish and sometimes even Maldonian accents!” a reference to the fact that the Irish contingent gathered in the pub for many years.

Richard and Jude who used to run the Carps were formerly tenants of another Grays pub, the Queen Victoria at Woodham Walter (a pleasant rural village three miles from Maldon) Richard’s laid-back (almost horizontal) approach to being a licensed victualler was totally suited to The Carpenter’s Arms. The locals like the pub just as it is.

As I mentioned earlier, across the road is the Blue Boar Hotel which used to be my local and (appropriately most friends say) I was born in the house that used to stand where the BB beer garden is now. My ‘Blue period’ was from 1976 until 1986 and during that time the Blue Boar Men’s Darts Club (BBMDC) used to regularly take on a team from the Carps. It was our local derby and the poster announcing the away match always included the legend ‘NO COACH’. For a while during the early 1980s I was editor of and main contributor to Out of the Blue the ‘Official Bullsheet of the BBMDC’; a photocopied newsletter which circulated within the team. I recently discovered a brief report from a match the Blue Boar played against the Carps (away) on Wednesday 25th November 1981.

It began ‘This report comes to you via the leaky ballpoint of cub reporter Ginny Murphy.’ The report of course included the result (We lost 11-3!) and included comments like Peter (Ginny’s husband at the time) ‘Lost, but he tried hard!’ Colin ‘Lost. No excuse’, Alf ‘Scored 114 and still lost’, Dave P. ‘Played a woman and scraped through.’ Ginny recorded an oche-side comment from a Carpenter’s supporter which summed up our team very accurately. He said to her, “Put the Blue Boar on halves. They’re too far gone when they reach the board!” They were great times. We were all so much younger then. We’re older than that now.

The Blue Boar has changed out of all recognition. The dartboard was taken down years ago and the place is now privately owned. After 1986, most of the BB drinkers migrated to other pubs. I went to the White Horse, Mundon (another pleasant rural village three miles from Maldon) and thence to the Maldon Constitutional Club but now Colin and I regularly support the Carps.

The Carps hasn’t changed at all. It is still low-ceilinged, warmly welcoming with its dimly-lit bar that Stephen Nunn describes and looks no different to the place I visited back in the 1960s when I was a mere lad, except that one song on the juke box (if they still call them that) is 50p. I used to be able to get pleasantly sloshed for ten shillings back then.

The Carps is a ‘proper pub’ and long may it remain so.

(with due acknowledgment and thanks to Stephen P. Nunn and the late Ken Stubbings)

Barber, Norman. Where have all the breweries gone? (Manchester: Neil Richardson (in association with CAMRA), 1984), page 11.

The original version of this article appeared in the Pub History Society’s Newsletter Winter 2009 and is reproduced with permission. For more details about the PHS and how to join please check out www.pubhistorysociety.co.uk.