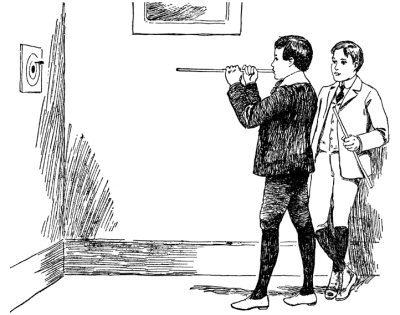 One of the earliest references to darts being played in alehouses dates back to the 16th century when the great-great-great, plus a few more greats, grandfather of darts ‘puff the dart’ was a method of whiling away a few lazy hours with some fellow ne’er do wells.

Puff the dart was simply the blowing of small darts through a tube at a small target, whoever gained the highest score with a given number of ‘puffs’ being declared the winner. By the time Queen Victoria came to the throne in 1837 ‘puff the dart’ was regarded as an old game and rarely found in the developing, improving drinking houses. However, it was still played in the smaller beerhouses but more or less disappeared completely by the turn of the twentieth century when ‘sucking instead of blowing’ occasioned a number of fatalities, the tiny darts being drawn down into the wind pipe or lungs and lodging there. Manufacturers introduced a safety puff the dart but the damage was done. Although this version of darts has enjoyed the occasional renaissance, such as Paignton’s Green Mantle Club and Torbay’s Railway Inn in the early 1990s, it is rarely found being played in the UK nowadays. The only real surviving sign is it’s distant cousin and spin-off, blow-football. By the mid-1920s modern darts were developing apace and one might have thought that the ‘puffing’ days were over. Not so, for one man.

Ron Tomlinson puffed darts, but he was a different kind of puffer. He didn’t use a tube. Instead he placed darts sideways in his mouth and puffed his projectiles across the stage at different targets – and he made a living at it! Described by Roy Hudd as a ‘dart-blowing speciality’, Ron was taught to blow darts by his father and was ‘discovered’ at the age of 12 blowing darts to hit cigarettes.

In 1949, after serving in the RAF, Ron went into variety, calling himself ‘RONDART’ – Now where did he think that up from? – and became an immediate success. Variety was at its height and, quite frankly, no one had ever seen an act like Ron’s before. He was unique. “We had ‘em all in variety!” wrote Roy Hudd.

Ron blew darts from his mouth with such accuracy that he could pierce a cigarette, cut thin strands of cotton and even propel a dart into the neck of a bottle from no less than fifty feet! This amazing act achieved cabaret status in 1953 and took Ron and his assistant, the Cristina, all over the world. One press review described his stage act as ‘sensational’ adding

‘Darts players who find difficulty in getting the best out of the sport can secure good hints this week at the Empire. But they will have to put in a lot of practice to emulate the fantastic feats of Rondart…’

I corresponded with Ron for a number of years and learned a great deal about this unique dartsman. Regrettably Ron was diagnosed with terminal lung cancer in December 2004 and, after a brief battle against the disease, passed away peacefully on Friday 28th January 2005. As top UK comedian Roy Hudd said when I broke the news of Ron’s death to him, “The news about Rondart is sad news indeed. He was one of the last representatives of the great variety speciality acts.”