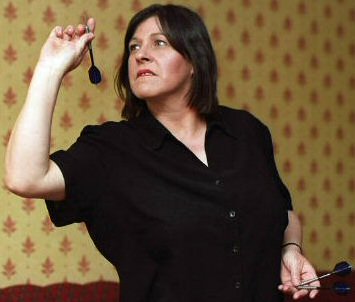 Darts playing became a cult in Britain in the 1930s and this brought darts to the attention of thousands of women throughout the country.

In December 1937 King George VI and his Queen (subsequently the much loved Queen Elizabeth the Queen Mother) visited a new community centre in the town of Slough, in the English County of Buckinghamshire and, during a tour of the building, played a brief game of darts. The following day a photograph of the Queen playing darts appeared in national daily papers with the Queen quoted as saying, “Do let me try. I have heard so much about this game.”

In the short game that followed (they only threw three darts each) Her majesty beat His Majesty by 21 points to 19 – but she did stand one foot nearer the dartboard. The darts cult then became a craze, the Queen’s action impacting especially upon women. Shortly afterwards the banner headline of a national daily paper read “Women Flock to Follow the Queen’s Lead at Darts” – the Queen had made women ‘darts conscious’. The office of the British Darts Council (BDC) was reported as being inundated with requests from women asking where they could obtain darts tuition. For a short time darts appeared to transcend class barriers and gender barriers, but it is unlikely that it would have ever lasted. In any event, within two years, the Second World War had intervened.

During and after the Second World War darts spread across the globe. American servicemen returning home took the game back with them from England. In pre-war America the game had been considered to be more a child’s game than an adult sport or pastime. Ex-patriots who had decided to stay in countries, such as Holland and Spain, where they had been stationed, established dart clubs in Europe. Darts leagues were being created at an amazing rate, particularly in Britain, but they were predominately male and any incursion into ‘his domain’ by female dart players or teams continued to make the headlines throughout the 1940s, 1950s and 1960s.

In 1963, for example, a housewife from Lancaster, England, applied to join the local darts league only to be told it was ‘men only’. Despite such setbacks ladies teams and individual enthusiasm for dart playing continued to grow and the inequality of opportunity began to fade during the second half of the twentieth century.

In 1958 the National Darts Association of Great Britain (NDAGB) (established 1954) introduced the first Women’s Pairs Competition which was won by Joan Adams and Rose Branham of the Workers Club, Kings Lynn, Norfolk. The NDAGB also organised Mixed Pairs Championships and, in 1967, introduced a Women’s Individual Championship which was won in its inaugural year by Marjorie Drabble of the Marston Moor Club, near Chesterfield, England.

Not until mid-1970s were women’s darts taken seriously, but then not serious enough to attract the all-important attention of TV. Thus, except for the lucky few, sponsorship was merely a dream for most lady darters.. It was not until 1973, the year of the founding of the British Darts Organisation (BDO) that women’s darts were truly recognised and women’s participation put on a similar footing to their male counterparts. The BDO first ran women’s singles in the 1979 British Open which was won by Judy Campbell of England. From the beginning the BDO structure for the County league encompassed ladies darts. Women also participate in the World Darts Federation World Cup which is held every two years. In the 1997 World Cup no less than twenty-nine countries were represented including Brazil, Bermuda, Malaysia, Kenya and Japan. Each included a women’s team. The top five women’s teams in that year’s competition were (1) America, (2) New Zealand, (3) Philippines, (4) Northern Ireland and (5) Wales.

The News of the World Individual Darts Championship, up until the late 1970s the darts competition to win, was first competed for in the 1927/28 season. Although there is some evidence that women played in the early rounds of this competition over the 70+ years of its existence it was not until the competition was in its last year (1989/90) that a separate event was organised for women. This was won by Lynne Ormond (The George, Alford) who beat Jane Stubbs (Roebuck Hotel, Northwich).

The News of the World was then suspended but was re-launched – as it happened for one year only – in 1996. The last eight women’s finalists all hailed from Britain, and the winner was Linda Jones (Seven Stars, Chorley) who beat Melanie Saunders (Railway Inn, Abergavenny) in the final. Linda won a first prize of £6,000. Although a valuable top prize for women’s darts, this should be compared with the £42,000 first prize for the men’s champion, England’s Phil Taylor. After that competition the News of the World Individual Darts Championship was then suspended once more – this time indefinitely.

In late 1995 the British Darts Organisation (BDO) agreed that women dart players could enter the preliminary rounds of what is regarded by the majority of darts aficionados as the greatest darts championship in the world, the Embassy World Darts Championship. At the turn of the twenty-first century no woman had made it beyond the qualifying stage of the Championship.

In May 1978 ex-World Professional Darts Champion, Leighton Rees (Wales) said, “I think we’ll soon see the time when the world men’s champion will lose to a woman. There are some great girl players on the circuit now…” Although women darts players had – and still have – fewer opportunities available to them for championship play, and thus lack the experience of men in this respect, there is no physical reason why their proficiency at the sport of darts should not be equal to that of their male counterparts.

Despite the increase in competitions available to women during the late 1970s and early 1980s, there has never been sufficient interest shown by TV companies or sponsors and thus the potential earnings for women were low – and this continues to be the case to this day. Earnings rankings published in Darts World magazine in February 1999 showed that England’s Trina Gulliver was at the top of the table, earning a mere £4,555, excluding exhibitions, during 1998. (In comparison, the top three male dart-players earned in excess of £25,000, excluding exhibitions.) World Darts Federation (WDF) rankings, based on a points system, published that same month showed the top woman player in the world to be Trina Gulliver, with Francis Hoenselaar of the Netherlands runner-up. The highest ranked American woman darts player was Stacy Bromberg in eleventh place.

In 2001, the BDO introduced the Embassy (later Lakeside) Women’s World Darts Championship which was won by England’s Trina Gulliver who, at the time of writing has won the event no less than nine times, Anastasia Dobromyslova bringing Trina’s record of seven consecutive occasions to an abrupt holt in 2008.

While this competition was a breakthrough for ladies’ darts in 2001, there have been few other opportunities for women darts players to earn a decent living on the professional darts circuit. To an extent this explains why those appearing in the major finals tend to be, as some might put it, ‘the same old faces.’ Female darters like Trina Gulliver, Francis Hoenselaar and Russia’s Anastasia Dombromyslova have worked hard at securing sponsors and harder still at their craft; the latter even participating on the PDC circuit playing against the men until her return to the BDO in 2009.