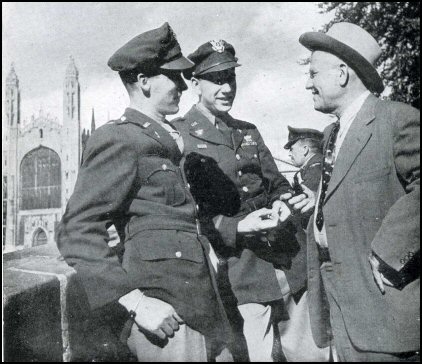 In the Spring 2008 issue of the Pub History Society’s Newsletter I wrote about the American ‘invasion’ of the traditional English pub during the Second World War. In this article I maintain the ‘Yanks over here’ theme, but this time focus on a member of academia and a pub by the River Cam.

In the autumn of 1942, Cambridge University instituted its first Professorship in American History. Henry Steele Commager of Columbia University, New York, was invited over to blaze the trail but he stayed only one term and was then asked to nominate his replacement. The man he selected was one of his Columbia University colleagues, a Texan named J. Frank Dobie.

It appears that Dobie was surprised at the nomination. He told Commager, “I haven’t read the American Constitution since I was a boy and didn’t understand it then.” He explained that his knowledge of his country’s history consisted mainly of facts relating to, amongst other things, ‘the length of the horns of Longhorn steers, the music inherent in coyote howling, the way mother rattlesnakes swallow their young [and] the speed of the Pacing White Mustang …’

It seemed that Commager was well aware of Dobie’s ignorance of ‘genuine history’ but assured him that such knowledge was unnecessary when teaching novices at Cambridge University. Commager told Dobie, who was ‘too old to fight’ in the US forces, not to concern himself too much as virtually all the young men were in the armed or technical services and then young women in auxiliary branches and so whoever he ended up teaching would be absolutely at his mercy. A letter from a fellow Texan based at Oxford University that encouraged Dobie to make up his own definition of history and ‘come on over’, soon helped make up his mind. At two o’clock on the afternoon of 6th October 1943, Dobie stepped out of a taxi in front of Emmanuel College, Cambridge.

Never intending to set out to write a book about his life at Cambridge – indeed he wrote ‘I proposed not to add to the books on England’ – Dobie eventually put pen to paper because ‘experiences within myself as well as without made me want to say something.’ The result was A Texan in England which was published in May 1946. It is Dobie’s love of one pub that I hope will be of interest to PHS members.

Over and above his strenuous academic activities, Dobie thoroughly enjoyed the city and spent some time in seeking out the single establishment that suited him best. Of the numerous pubs he sampled in Cambridge Dobie wrote:

‘The Baron of Beef, out of bounds for American soldiers; The Angel, where soldiers are too think for anybody else to get in bounds; The Castle, where the matured barmaid combines dignity with easy welcome; The Jug and Bottle, where citizens take their pitchers to be filed; The Red Cow, too cavelike for cheer; The Bun Shop, often in stock when other pubs have run out but too garrulous for conversation; The Hat and Feathers, too far away; The Little Rose, just what it should be.’

Of his discovery of The Anchor in Silver Street, by a bridge and a fall in the River Cam, Dobie said, ‘…after I found my place at The Anchor, I always felt I was missing something good in life if I went anywhere else.’ He had discovered the homeliness and the comfort of the traditional English pub. He felt secure there and when darkness began to fall and blackout curtains deprived him of the view of the river he merely turned to look into the blazing fire in the inglenook. The Anchor was to become his ‘refuge’ during his time at Cambridge.

As the days lengthened Dobie would arrive at The Anchor promptly in the evening at opening time, 6 p.m. and thus always used to manage to secure a seat by the window where he could watch ‘the mallard duck with her little ones, which grew up and practised swimming’ while in the elm trees beyond the river ‘the rooks talked about their nests, their eggs, their young ones and other things…’ Unless the weather was bad he would watch young men and women in punts on the river. Dobie wrote of this ‘How beautiful the water dripping from oars is in the slant of sunshine!’ With ‘a contented white cow’ moorhens and swans with ‘their eight half-grown grayish cygnets’ completing the view, Dobie painted an idyllic English scene from the pub window.

Jack Barrett was the proprietor of The Anchor at this time and in addition to his normal pub business he rented boats from a little connected wharf. Shortage of beer often caused Barrett to delay opening by an hour but this did not affect Dobie and his friends. Barrett allowed then to go in the back way ‘at the accustomed hour’, draw their own bitter and sit in an upper room always, as Dobie emphasises ‘against the river.’

Barrett sounds like the perfect publican. Dobie describes him as ‘a philosopher, kind of partridge-built, quick as a cat on his feet, light always dancing in his eyes’ and of Barrett and his wife he commented ‘I don’t know anybody more cheerful than he and his wife are.’ Sounds perfect Frank. At the time Dobie was frequenting The Anchor, Barrett and his wife had kept the pub clean and cosy and making a good living ‘for years.’

Dobie thought about what these two industrious publicans could do with a similar establishment in America. He guessed that they would make ‘a barrel of money’ by enlarging the premises to accommodate more and more customers and keep on enlarging it ‘until it grew as big as Madison Square Garden’ or else become a ‘standardized unit in a standardized chain’. But Dobie saw that long before reaching either stage the pub would have ‘lost the character that makes the snug little public houses and inns of England veritable “islands of the blest”’; a view shared by Robert Arbib, the American servicemen featured in my article in the last Newsletter.

J. Frank Dobie returned to America after only one year in Cambridge and decided to write a book. The Anchor was so vivid in his memory that he devoted a whole chapter to the pub that acted as his ‘refuge’ during his stay at Emmanuel College.

His ‘refuge’ still stands today and is as popular as ever. The description on the pub website states that The Anchor is ‘the best place to relax, chat, enjoy a pint of fine real ale, try a traditional English Sunday roast and watch the punts float by on the river Cam’ with ‘stunning views’ could have been written by Dobie himself.

Today, in addition to ‘hearty traditional fayre’ such as steak and ale pie and a good range of cask ales, The Anchor provides intellectual diversion every Thursday in the form of a Quiz Night (where you can win £20 in ‘Anchor money’) and is a ‘popular hang-out for students’. Of this I think Dobie would have approved.

Whether he could have come to terms with the presence of a cash machine, the Staropramen and Leffe Blond lager, jugs of Pimms and witness, as one visitor commented, ‘some serious pint-swilling going on across the Anchor’s three floors’, is another matter.

The original version of this article appeared in the Pub History Society’s Newsletter Summer 2008. For further details about the PHS and how to join the Society please check out www.pubhistorysociety.co.uk.