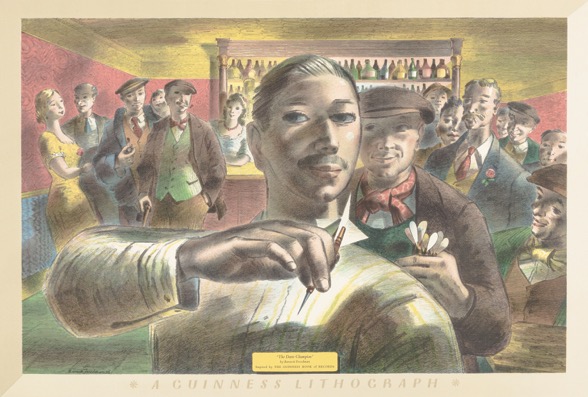 ‘My company are planning to distribute a number of auto-lithographs to public houses, working men’s clubs etc. The subjects of these lithographs are to be taken from the Guinness Book of Records. This book, which has been published in very large quantities, is a collection of facts, which give the superlatives in many different fields…’

Each artist chose a subject to illustrate from the Guinness Book of World Records. The prints were destined to hang in smoke-filled pubs and working-men’s clubs of the 1950s and -60s and so needed to be bold and colourful and they had to appeal to audiences by depicting a subject matter that might be debated over a drink or two. As such the themes of darts, horse racing, pigeon racing, football and fishing were among the subjects chosen. Artist Barnett Freedman (1901-1958) known as a master of lithography oversaw the project. His lithograph The Darts Champion is a wonderful image.

In the first Guinness Book of Records the records for darts included fastest round the board, fastest match, greatest crowd and most titles with Jim Pike listed as holding the records at the time. In the book there is a photograph of Jim Pike at Birmingham in 1952 recording the fastest match of three games of 301 in two and half minutes. Barnett Freedman’s image may not though be Jim Pike. Thanks to Darts Historian Dr Patrick Chaplin we know that Jim Pike never sported a moustache and so the image in Freedman’s lithograph has more of a resemblance to Pike’s adversary Joe Hitchcock.

This image of The Darts Champion and the other prints in The Guinness Lithographs provide a glimpse of our social history, capturing as they did the everyday life of the people at the time. They are as appealing now as they would have been over fifty years ago.

Read the full story in the book ‘Who? What? When? The Story of The Guinness Lithographs’ by Emma Mason £10.00available to buy at www.emmamason.co.uk where you can also buy original prints.

NOTE: At the time of writing Emma Mason has informed me that she is currently working on a large exhibition on Barnett Freedman which will be at Pallant House Gallery in Chichester in Spring 2020. Emma told me that ‘The Darts Player’ and the related art work will be displayed in the exhibition. More details will be provided as soon as I receive them and published here and in Dr. Darts’ Newsletter (DDN).