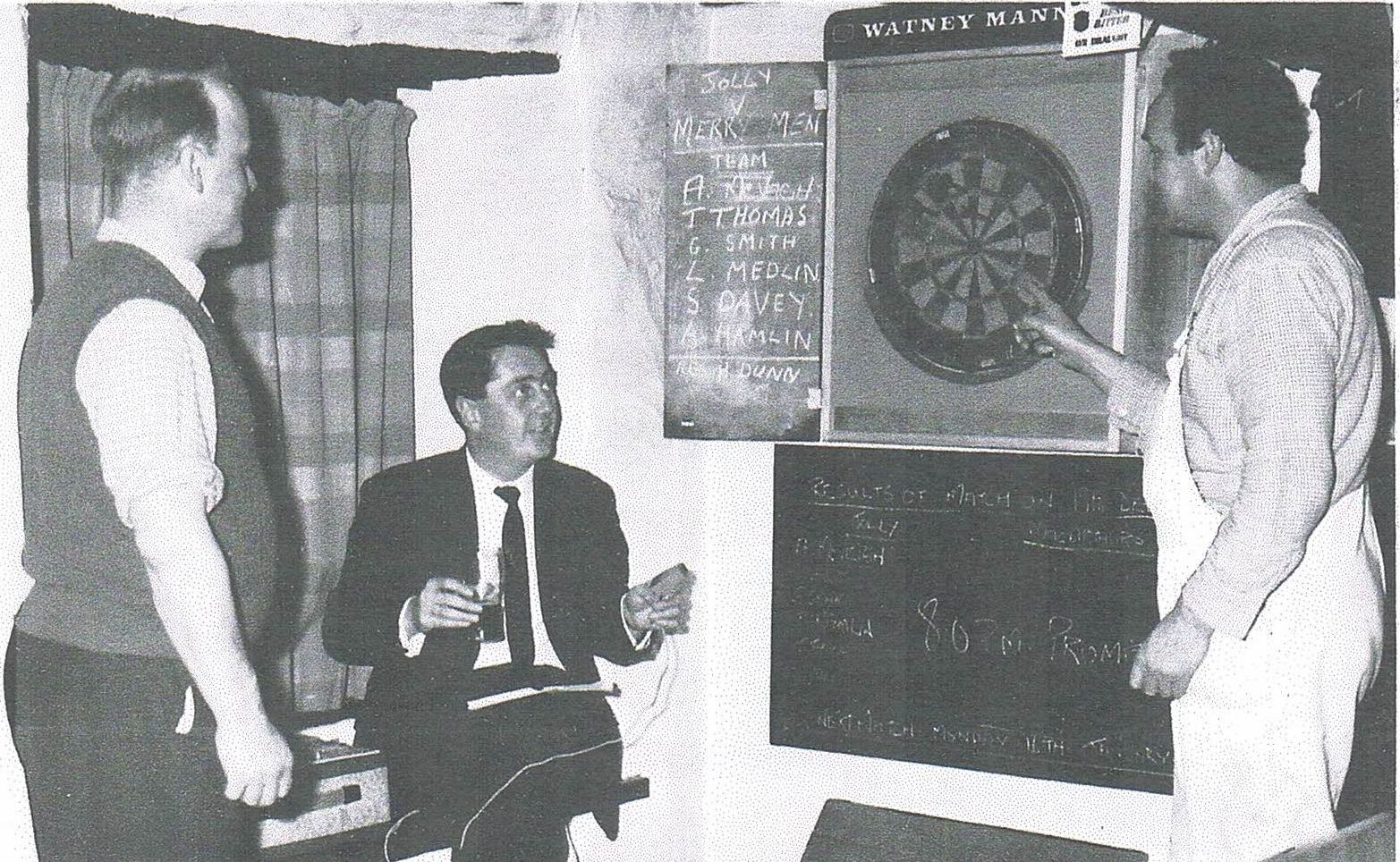 People familiar with my research, especially when reading pieces I have written for Pub History, the quarterly magazine of the Pub History Society (PHS),will know that when inspiration for pub-specific articles falters, I tend to resort to writing about darts, my original pub-related passion and research which gained me a Ph.D. at Anglia Ruskin University (ARU), Cambridge back in 2006.

On one occasion, whilst seeking inspiration during a lengthy bout of ‘man-flu’, I settled for a pub darts story; an unusual tale of mistaken identity, an international darts match and a ‘pit’…

Usually, when I receive questions via my website or by e-mail relating to darts history, I can provide an answer within a few days either from my own knowledge and/or archive or by consulting one or more of my numerous contacts in the world of darts. However, on one occasion, a question was raised relating to a pub in Cornwall to which I had no answer.

The enquirer, Michael B., had written

I visited Looe, Cornwall in 1970, and there was a pub there, Smugglers I think, that had a low ceiling, so to play darts one had to stand in a hole in the floor, covered by a trapdoor when not in use. My memory tells me that this pub held a darts tournament with Boston, Massachusetts I believe, via Telstar, the first International televised match.

I went back there some years ago, but the pub had been redesigned, the trap door and darts board gone, and no one knew anything about a Telstar match. Was I dreaming? I can’t seem to find out anything about it…

Having found nothing about this apparently unique darts match in my archive and there being no national or regional darts magazines in 1970, I wrote a letter to the editor of the Cornish Times hoping thatreaders of that newspaper would be able to help. Did they know anything about the Smugglers pub, the international ‘televised’ darts match, or of playing darts from a hole in the floor?

More or less immediately, a number of readers responded telling me that my enquirer had the wrong pub. It was not the Smugglers Inn at all but the Jolly Sailor at West Looe. According to its website (circa May 2018), the Jolly Sailor, sited in Princes Square, was established in 1516 and is ‘one of the oldest pubs in the UK.’ The website text continued

Affectionately known as the Jolly by the locals, it has been a place of rest and recreation for seafarers and travellers alike for centuries. It was featured in a Wills cigarette card collection from 1939 called Old Inns.

The legend on the reverse of the aforementioned W.D. & H.O. Wills cigarette card read

‘Many romantic stories of smugglers and smuggling are woven this quaint water-side tavern at West Looe which dates back 500 years or more. No doubt in those old smuggling days the innkeeper himself was not averse to receiving his liquor through somewhat unusual channels, and there is a story told of one landlord of the Jolly Sailor who was nearly caught red-handed when the Excise men entered his taproom unexpectedly.

Fortunately for him, his wife came to the rescue; with great presence of mind she gathered the incriminating kegs beneath her extensive petticoats and continued knitting until the unwelcome visitors made their departure. Not long ago there was an equestrian figure on the roof of the Jolly Sailor, said to have been erected during the Civil War to indicate that those within were sympathetic to Cromwell’s cause.’

Sea faring vessels used to moor right alongside the old part of the Jolly Sailor building, until land was reclaimed to build the cottages that are now adjacent to the pub. The main beam in the Jolly was taken from a French ship of the line at the Battle of Trafalgar in 1805. The ship was captured and renamed The Indefatigable. When she was later broken up, the landlord of the time arranged for the beam to be installed in the main bar and it remains there to this day.

The Jolly Sailor has been refurbished to a very high standard, making it one of the most pleasant, as well as the most characterful of places to stay in the famous Cornish harbour town of Looe.

But beware, many Cornish books and stories report that the historic rooms of the Jolly are haunted…

Haunting is, perhaps, for another day. In the meantime, back to the darts and the pit…

I remember the dart pit very well. As a young man I played darts for the Jolly Sailor…The dartboard was inside the pub door on the left with the pit by the coal fire at the end of the bar. It was because of the low-beamed ceilings. The pit was boarded over when in not in use.

During the 1930s darts experienced its first ‘boom’ and became extremely popular all across England. Dartboards went up in thousands of pubs as landlords embraced the ‘craze’. They had to, otherwise customers who wanted to play the game would have gone elsewhere to experience this new fad thus losing the publican precious custom.

In some cases the architecture of the pub proved problematical. In the case of the Jolly Sailor the ceiling was too low which meant that players’ darts once thrown would either hit the ceiling or, more often, the beams and not the dartboard. So, the answer was to dig a small trench or pit into which the players could step.

In his book Darts (1936) author Rupert Croft-Cooke recorded that, at The Case is Altered pub near Ruislip (now part of the London Borough of Hillingdon), ‘owing to the low ceiling, the players have to stand in a little pit.’ Thus the pit guaranteed that the official height of the board (5’ 8” from the centre of the bull to the floor) could be attained as well as the player being afforded a full view of the board. (At the time of writing The Case is Altered still exists but the ‘little pit’ is long gone.)

One respondent from the Cornish Times letter, who wished to remain anonymous, recalled an occasion in the 1970s when he went to step out of the darts pit with darts in one hand and a full pint in his other hand, slipped, fell out of the pit and did not spill a drop!

I started playing darts when I was 19 years old back in 1959…The hole in the floor has long gone. Where the dartboard used to be they had cut a doorway through to the Lounge Bar, filled the floor in. There you go. That’s history.

(I tend to forget that some public bars back in the day had no direct links to the posher Saloon or Lounge Bars.)

The floor did have a hole in it that did have a cover. I haven’t been to the pub for years and as far as I know the hole is still there.

Charlie also remembered the pit flooding at high tide! (The colour photograph of the pub provided by Charlie shows the original positions of the dartboard and the pit.)

Derek Powell also told me that darts is no longer played in any pubs in Looe, ‘replaced by food’. So Looe is now dart-less.

John Pengelly also remembered several matches being played against an American darts team. He did not participate but remembers

The main man on the mike was Mr. Ted Thomas, others included Mr. Reg Bassett and Mr. Eddie Walke…The pub landlord at the time [circa 1964/65] was Mr. Alec and Mrs. Olive McVee.

Mrs. Val Reilly of Trerulefoot was a mine of information. She told me that she was ‘surprised and delighted’ by my letter in the newspaper. Val’s father Les Medlen was part of the team in question and she was able to provide me with two photographs dated 1967.

So how were these ‘international’ matches actually played?

A phone call from Lester Pengelly explained all, or practically all. Lester told me that each game was 301-up, double in, double out and they were recorded on a reel-to-reel tape machine (hi-tech in those days). The tape was then posted off to their opponents in America. In return the American team would play and record their game and post a tape of their match to the lads at the Jolly Sailor. On receipt they would find out who had won in the least number of darts and record victory or defeat.

Marion Pengelly told me that it was probably Ted Thomas who made the arrangements. The second photo provided by Val Reilly shows Gordon Smith with ‘the recording device’ preparing for the match against the ‘Merry Men’.

Thanks to Cornish Times readers the story of the ‘pit’ has been clarified and so has part of the story of the international darts matches played via an exchange of tape recordings. Thus the latter had nothing to do with Telstar or an early satellite broadcast but all to do with the landlord and customers at the Jolly Sailor somehow making a connection with darts players in the USA and using the best means available at the time to record the matches.

On receipt of this information, Michael B., who made the original enquiry, wrote:

Patrick. Wonderful to hear from you and thanks for digging up the story of the pub, the pit and the international matches.

I don’t know how I got Telstar and Boston in my memory… I did have the pub name wrong too, but in general it seems that I did not dream the general story. Thanks for doing your investigations and I hope that you might uncover more information in future!

What hasn’t been clarified is the actual US pub the Jolly Sailor team played against; the ‘Merry Men’. Was it in Boston, Massachusetts as my enquirer suggested? Was the pub perhaps called the Robin Hood?How and when and by whom was the initial link made with the American pub?

Responses from readers of the Cornish Times indicate that these international ‘by-tape’ matches were definitely being played in the mid-1960s and probably into the 1970s but can any other Cornwall-based readers of this article provide more information regarding actual start and finishing dates?

I would love to fill the gaps and complete the story.

Weeks after I had completed the initial draft of this article, and purely by chance, I happened upon a story in the very first issue of Darts World magazine (December 1972/January 1973). It was titled ‘Have you heard…’ and ran as follows

…ABOUT the publican in Cornwall who found an ingenious way of solving a tricky darts problem?

To be eligible for competitions the pub dartboard had to be at the regulation height of 5ft 8ins from the bull. But the ceiling was only 5ft 10ins from the floor!

With a large helping of Cornish logic the board was set as high as possible and a trench sunk in the bar floor, with the “man on the mark” clambering in each time to take his throw.

The pub was not named but could it have been the Jolly Sailor at West Looe?

© 2018 Patrick Chaplin (with thanks to readers of the Cornish Times for information and photographs and to Chris Murray, Editor of Pub History for additional information from his archive.)

[This article was originally published in in 2018 in Dr. Darts’ Newsletter #99 (June 2018) and Pub History (the Pub History Society’s quarterly) (Summer 2018). For information about the PHS go to http://www.pubhistorysociety.co.uk.]