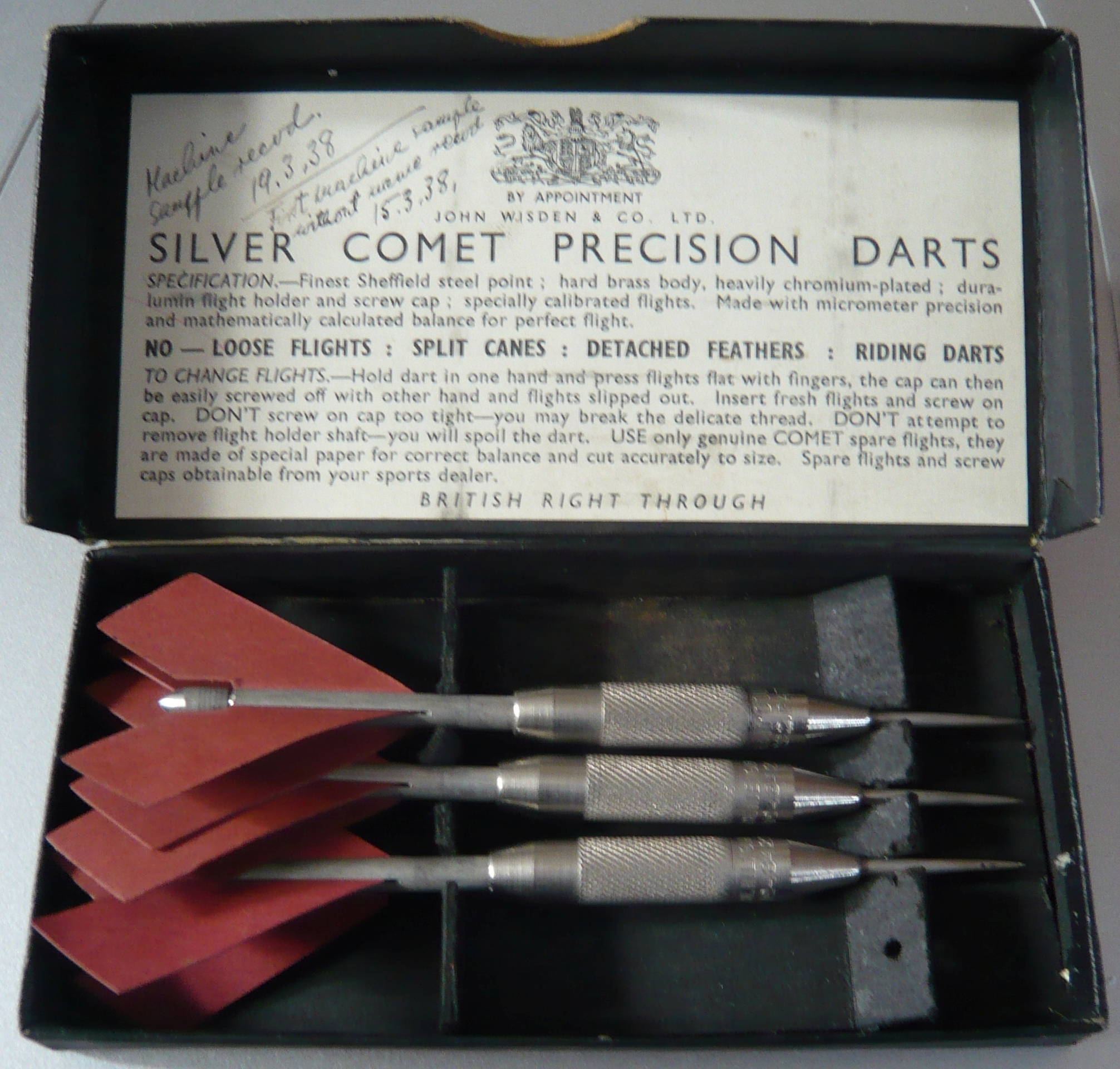 On 16 August 1986, at very beginning of my journey to discover the origins and development of the sport of darts, I drove to London to interview Stanley Lowy MBE, son of the founder of Unicorn Products Ltd, Frank Lowy.

Much of the information gathered on that day was later used to record the company’s history as part of my research which led to my being awarded a PhD in 2006 by the Anglia Ruskin University, Cambridge for my 104,000-word dissertation Darts in England 1900-39 – A social history. The chapter titled ‘The Darts Industry from the late Nineteenth Century to 1939’ featured all of the key pre-war darts and dartboard companies. The following is an extract from that chapter which specifically deals with Unicorn.

Hungarian immigrant, Ferenc (Frank) Lowy (pictured) (Image copyright Unicorn Products Ltd. Used with permission.) had settled in England in 1929.  An engineer by trade, Lowy found his early success as a patent agent although he also undertook work as an engineering consultant.  In 1936, whilst on holiday with his family in Littleham, near Exmouth, Devon, Lowy observed a game of darts being played in a local public house.  Upon returning to London he purchased an elm dartboard and began to consider the business potential of darts with the result that he turned his engineering knowledge and skills to the manufacture of his own style of darts, targeted at the middle and upper classes, and produced a dart of revolutionary design.

Before Lowy became involved with darts manufacture there were two kinds of darts that were most commonly used in England, the ‘French’ dart, which was machined out of wood and had turkey-feathers for flights, and the brass dart, which consisted of a brass barrel and a wooden or cane stem with feather or paper flights. Lowy’s unique revolutionary concept in darts was an all-metal, except for the flight, chromium-plated dart which featured a new innovation, a small streamlined screw-on cap.  This cap of patented design performed the dual function of holding the paper flights securely in place and deflecting any in-coming darts that struck it into the board.

Lowy’s darts were marketed through John Wisden & Co who, at the time, held the Royal Warrant for the supply of sports goods.  Wisden’s had for many years sold a range of sports goods under their own brand including tennis racquets, which were manufactured by others. The brand name was ‘Silver Comet’ and Lowy’s darts were included in that range.  Wisden’s sold Lowy’s darts in boxes of three which in itself was an innovation at the time as until then, unless three darts had been provided with a dartboard as part of a set, darts were sold singularly; working class players not being able to afford or indeed need to replace all three darts at one time.

Lowy sold each set to Wisden’s for one shilling, Wisden sold them to sports shops for one shilling and sixpence and the shopkeepers charged the customer two shillings and sixpence. At that time the shopkeepers’ selling price was five times more than the price of three wooden ‘French’ darts.  At such a high price, ‘Silver Comet’ darts were produced to satisfy demand from the more affluent middle and upper classes who during the mid-to-late 1930s had become interested in the game as a current novelty. Lowy was taking a considerable gamble that such interest would sustain his business but, despite the cost, following their launch in 1937, the ‘Silver Comet’ darts were an instant success, 170,000 sets being sold in the first year.

In 1938 the branded sports goods division of John Wisden & Company went into bankruptcy with Lowy sustaining a loss of £800.  Despite this setback, Lowy established his own business and for a short while traded as ‘F. Lowy’ which, by late 1938, was changed to Unicorn Products Ltd.  Five decades later Unicorn Products Ltd. was described as the ‘Biggest success story in the game of darts.’

Afterwards, uniquely, I record the comments of Stanley Lowy MBE, the senior member of the Lowy family who own the company, presented to me after he had read the chapter.

‘Patrick. Your PhD was an almost perfect accurate record of our long-time-ago meeting. The only fact you recorded incorrectly was the origin date of the Unicorn company.

When the Wisden company collapsed father could no longer use the Royal Warrant insignia (referred to by your correspondent) on the box.

Dad was staring at the box and wondering what to do as he felt that some kind of device was needed to continue as near as possible the ‘look’ of the box which in such a short time had become well-known.

He observed the Unicorn in the Royal Crest and it occurred to him that a leaping Unicorn with its single horn would be an appropriate symbol to typify the speed of a dart with its single point. So Dad commissioned an artist, Arthur E Benningfield, whom he knew through the patent practice to sketch some Unicorns. Benningfield produced a sheet of pencil sketches and Dad chose the stance of one, the head of another and the horn of yet another sketch and the original Unicorn device was born. It was thus that Unicorn Darts the Brand started in 1938/39.

However (and after all that explanation) Unicorn Products Limited the Company was not established until 1941 when Dad received advice about the business advantages of trading through a limited liability company rather than as a private individual. That is the only slight inaccuracy in your PhD record.

Dad got into business with John Wisden in through the name ‘Silver Comet’.

Being in the intellectual property business Dad dreamt up the name ‘Silver Comet’ and sought to file a registered trade mark application. Wisden got in touch and asked on what Dad wanted to use the mark for Wisden offered a tennis racquet which was branded Silver Comet. Wisden looked at the dart and asked how it was to be sold. At that point Dad had only offered it to one or two shops personally. Wisden offered to be the distributor and thus the relationship was born.

You are incorrect about the retail price shown…which was 2/6d (two shillings and six pence) (12½ p today). 2/6d was about five times the average cost of a set of darts at the time.

Unicorn Products Ltd is one of the few darts companies to actually present their history on their website. This also includes some fascinating old catalogues featuring their renowned 50,000 darts products. Seek the history out at www.playwiththebest.com.

(NOTE: The book version of Darts in England 1900-1939: A social history was published by Manchester University Press in hardback in June 2009. The paperback edition published in 2012 is still available.)