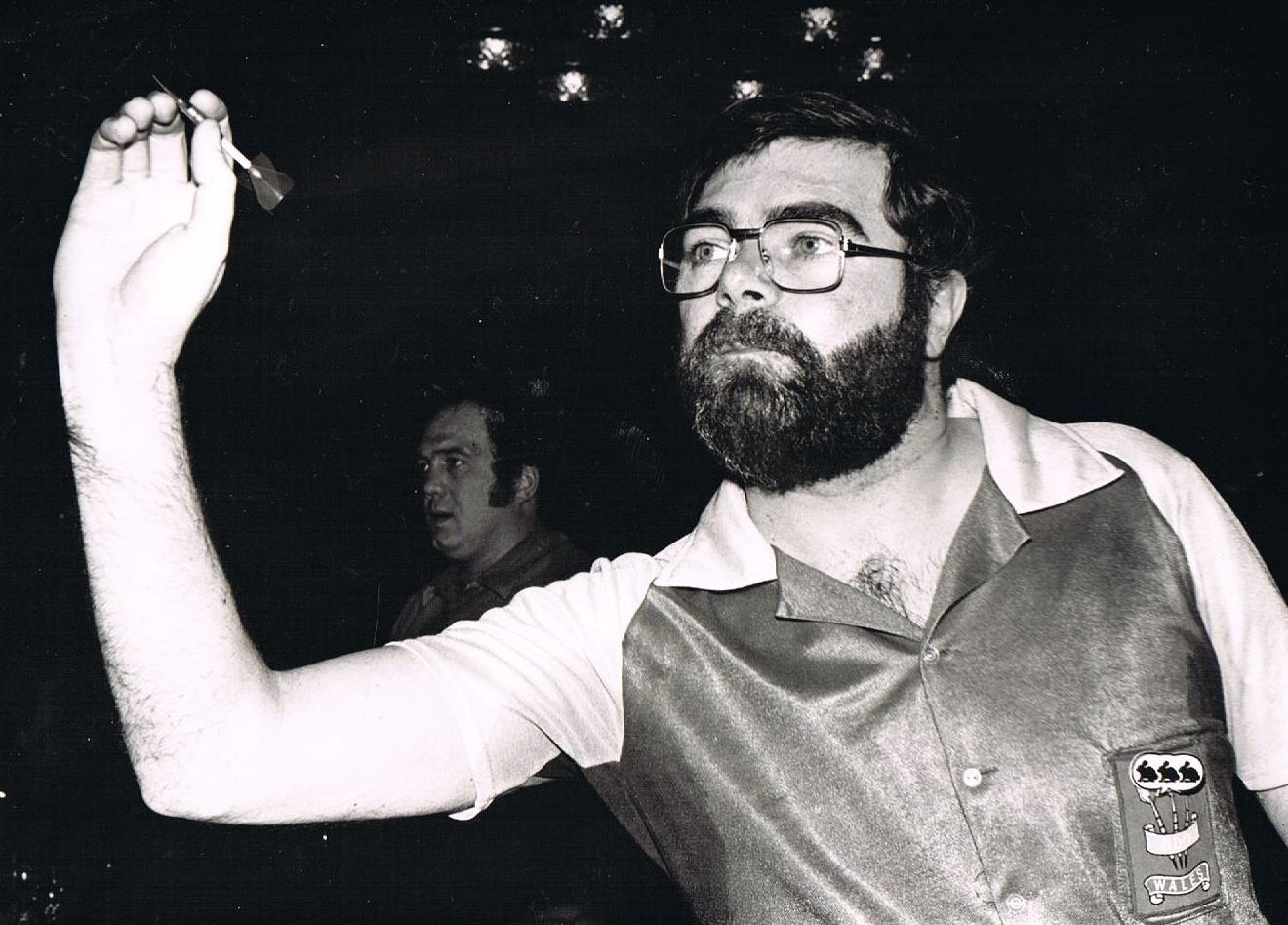 The world of darts mourned yet another popular darter of the past with the death, on 29th February 2020, of Wales’s Ceri Morgan. He was 72.

Ceri was born in Treorchy, Mid- Glamorgan on 22nd December 1947. Bearded and bespectacled he played his County darts for Glamorgan.

According to Derek Brown (author of The Guinness Book of Darts) Ceri took up the game during his lunch breaks when he was an apprenticed toolmaker and played for the Red Cow and the Prince of Wales in his home village. A Welsh international of long-standing, Ceri represented his country on 53 occasions.

His international career started well in 1974, with him winning all of his first three Home International matches. Ceri was later dropped but was back on top form in 1979 and reselected.  That same year he was chosen by the selectors to represent Wales in the Nations Cup and the World Cup in Las Vegas. In the Nations Cup Wales came runner-up to England, the others in the Welsh team being Alan Evans and Leighton Rees. In Las Vegas Ceri was runner-up in the singles beaten in the final by USA’s Nicky Virachkul. Ceri had beaten England’s Tony Brown in his semi-final.

Ceri won the WINMAU Welsh Open in 1980. The venue was the Diamond Theatre Club, Caerphilly. Ceri defeated John Corfe (Clwyd) in the semi-finals and then beat Wales’ Wayne Lock in straight sets (2-0, 2-0) in the final. (The image shows Ceri being presented with the Welsh Open trophy by Harry Kicks jnr of the WINMAU Dartboard Company.)

His biggest pay-day came later that year, on 6th December, at the Forum Leisure Centre, Wythenshaw, Manchester when he won the Austin Morris British Masters. Ceri was one of eight top-ranked British ‘seeds’ who joined the competition in the second round of the tournament to take on the surviving eight regional finalists from the first round. Darts World reported

Morgan played consistently well throughout the finals, beating Bobby George in the final match by two sets to one and winning his games in 14, 17, 17, and 18 darts. Earlier Morgan had taken out Leighton Rees and John Lowe.

Ceri’s prize was an Austin Princess saloon car valued at £5,500. Unfortunately Ceri did not drive but the sponsors were good enough to give him the option of cash.

The Welshman’s best performance in the WINMAU World Masters came in 1982 when he reached the semi-finals only to fall at the last hurdle to Scotland’s Jocky Wilson. Remember that back in those days all players started from a standing start: no seeds. In that year 132 champions from 25 countries participated in the Men’s tournament so it was no mean feat for Ceri to make it so far.

As regards the world championships Ceri appeared in no less than eight Embassy World Darts Championship finals. In 1979, at Jollees Cabaret Club, Stoke-on-Trent, he beat Australia’s Barry Atkinson 2-1 in the first round then lost to England’s Tony Brown 2-1 in the second round. He returned the following year where he made the quarter finals where he lost 3-1 to Cliff Lazarenko. In 1981 he made it to the quarter finals for the first time where he was beaten 4-3 by England’s John Lowe. In 1983 he returned to Jollees, losing in the first round to Belgium’s Luc Marrell 2-0.

In 1984 he once again won through to the quarter finals where, once again, he met John Lowe and this time was whitewashed, 5-0. Undeterred Ceri was back in 1985 losing in the first round 2-1 to Northern Ireland’s Steve Brennan and in 1986 a second round 3-2 defeat to England’s Dave Whitcombe ended that campaign that year. Ceri’s final appearance at the Embassy World Championships in 1987 saw him pitched against Scotland’s Jocky Wilson in the first round at the new venue, the Lakeside Country Club, Frimley Green. Jocky won that encounter by three games to nil.

The other thing that many fans of darts back then will remember about Ceri is his unorthodox throwing action which Derek Brown in The Guinness Book of Darts (1980) described accurately as ‘whipping the dart away without appearing to take a steady aim. The final photograph accompanying this article shows that, sometimes, even the camera could not cope with it!

A great career in darts for Ceri Morgan. A proud Welshman and the pride of Wales.