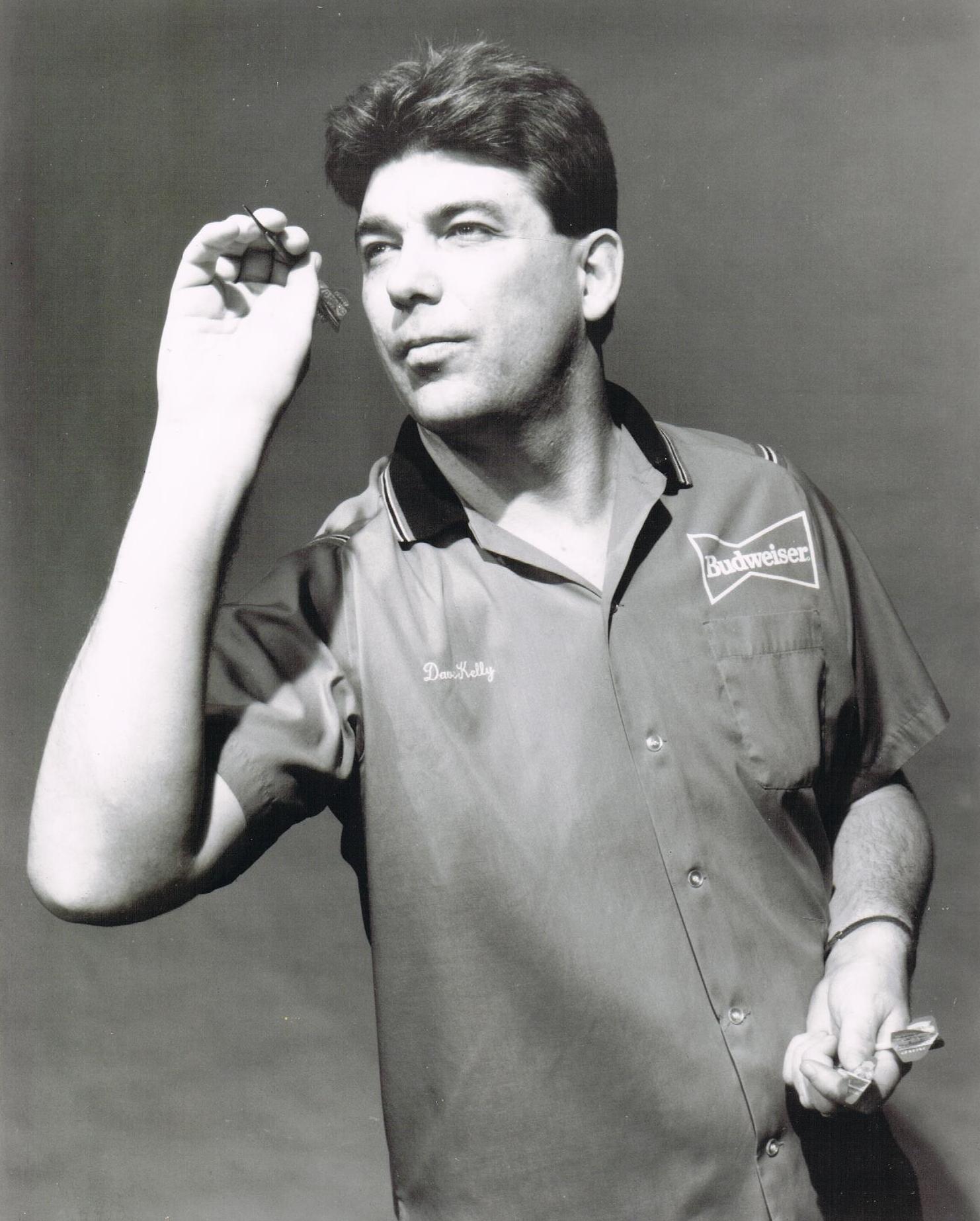 It is always a sad day when one hears about the passing of any well-known darts player. Regrettably, the month of June 2020 was no different. It is thanks to Warren A., one of my Australian friends, who was told by Aussie star Russell Stewart that US darts star Dave Kelly had died from cancer on 1st June.

Dave Kelly, a native of Boston, Massachusetts, had an illustrious darting career the highlight of which was being part of the World Darts Federation (WDF) Pacific Cup VI winning team in 1990. That event was hosted by the Singapore Darts Association in October that year; the US team comprising Paul Lim, Kim Kellar, Eva Grigsby and Dave, with manager Della Fleetwood.

All this added up to a victory for the American team with 150 points with Canada snapping at their heels with 145 points. It was the first time the US had held the trophy since 1988.

The win was celebrated by the premier US darts magazine Bull’s Eye News in the December 1990 issue, the front cover of which is shown here. The victorious team with the trophy (from left to right) Della Fleetwood (manager), Paul Lim, Eva Grigsby, Kim Kellar and Dave Kelly. (Image © Bull’s Eye News. Used with permission.)

Dave visited the UK a number of times playing British Darts Organisation (BDO) tournaments from 1982 until 1993 and then with the World Darts Council (WDC) from 1993-96 and then for the Professional Darts Corporation (PDC) from 2006 to 2008.

Dave is probably best known in the UK for reaching the semi-finals of the WINMAU World Masters in 1991. This was back in the days when all players entered in the competition and started from scratch from the floor that is, no seeding. To make it through to the final stages was an achievement in itself. Before that Dave had played in the World Masters twice in the early 1980s and in 1989.

In the quarter finals in 1991 Dave beat Danish marksman Per Skau 3-1 and went on to meet the eventual winner, England’s Rod Harrington, in the semi-final. Harrington beat Kelly by the same score 3-1. Harrington then went on to win the title beating Phil Taylor 3-2 in a tightly contested final.

Kelly appeared in only one BDO Embassy World Championship and that was in 1993 when he lost in the first round to Martin Phillips of Wales 3-1 with a three-dart average of 27.78.

Dave appeared for his country in the inaugural 1993/94 WDC World Championships at the Circus Tavern, Purfleet, Essex but failed to make it through the first, group stage, being beaten 3-0 by both Bob Anderson (England) and USA colleague Gerald Verrier.   He returned to the Circus Tavern in 1997 but was defeated in the Preliminary Round 3-1 by England’s Ritchie Gardner.

Back home in the USA Dave’s tournament successes were endless. For many years he was sponsored by Budweiser ‘The King of Beers’. When his sponsorship with ‘Bud’ was renewed in 1993 his exhibition commitment increased from around thirty to fifty per year. The Dave Kelly Exhibition Program focussed mainly on the north-east. When interviewed by Bull’s Eye News back in 1993 about his fifth appearance in the Masters Dave replied,

“Well, working with Budweiser and doing the exhibitions, I get enough practice in. I try to go over there as mentally tough as I can. I know it’s not easy to do what I did when I made top four.”

Dave also appeared no less than three times in the PDC World Matchplay 1994-96.

[Dave Kelly] also continued to compete on the North American circuit, and also played in the PDC’s 2007 US Open and 2008 North American Championship, as well as at the Las Vegas Desert Classic Qualifiers.

“Dave was a man whose talent and charisma made you believe anything was possible. His very presence at darts events gave the game that little bit extra that told you here is a sport, the sort of activity the best of the best can pursue with dignity.

A fierce competitor whose passion doing so was only equalled by his magnanimity and leadership off the board, Dave was a beacon who easily drew people to himself and the game, and became the iconic American leader who rallied his compatriots to accept nothing less than equality in the world of darts, both by example and spirit. The ultimate teammate is gone.”

“Sorry to hear Dave Kelly passed away this morning, I have known Dave for many years, he always kept in touch, a great dart player and representative of America.”

1994 World Matchplay champion Larry Butler described Kelly as “one of my favorite people”, and former Sky Sports commentator John Gwynne hailed him as “a most likeable man”.

I knew Dave Kelly from the get go when I first move to USA from Papua New Guinea leaving my job as a chef to pursue my Darts in the American Dart circuit.

I first went to Boston and that’s when I first met Dave Kelly.  Being the Dave as he is, I immediately took a liking to this person simply for his thoughtfulness and friendliness. He made me feel like I am his long lost brother. Eventually, I moved to California because I couldn’t stand the January freezing cold temperature.

But we became very close friends, playing in competitions as opponents and later as doubles partners. We travelled together, we shared rooms, we confided in each other. Always there to listen to my problems and always there to lend a helping hand when needed. He loved my cooking and I remember doing a feast with a group of our friends during a tournament in Martha’s Vineyard in Massachusetts.

A person who loved life.  A great dart player but most of all a great person.

Very sad that he has to go through his later part of life in sickness and pain. Just isn’t fair I thought sometime… But I am glad it is over and he doesn’t have to suffer anymore.  We definitely lost a great one.

I cannot describe how much I miss that guy…

Dave Allen also pointed me in the direction of Howie Reed’s tribute published on Dartoid’s website. Here’s the link:

© 2020 Patrick Chaplin (text) with due acknowledgement to Dave Allen and the PDC.