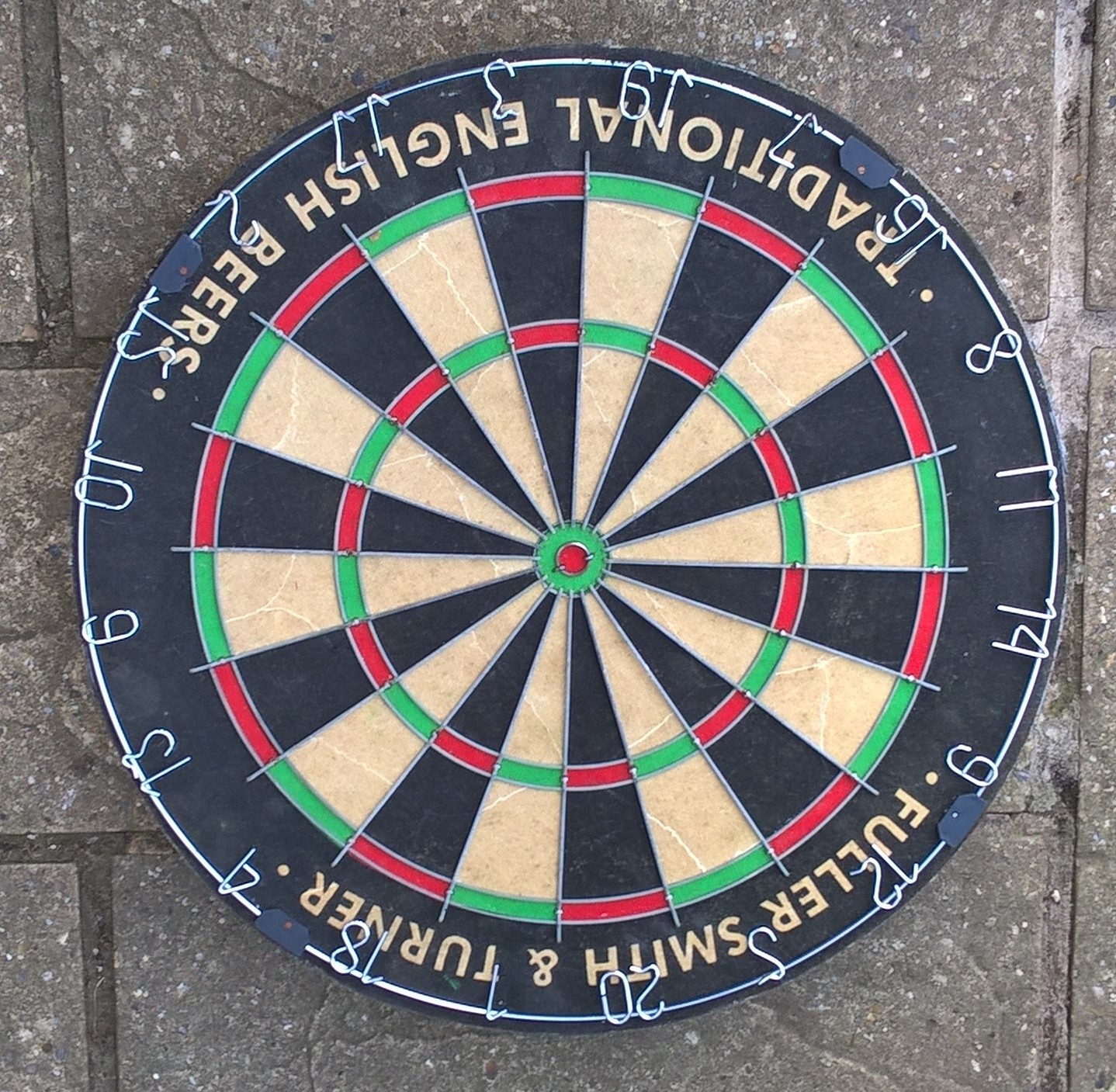 Matthew Scralenge of the Little Shrimper and Punchbowl pub darts team in West Suffex, England, has become the first darter ever to achieve a five-dart 501 on a standard dartboard.

Stunned onlookers watched as Matt shot treble, treble, double, single and double in just five darts to secure a victory over Dan Dadandan in the first round of the last open singles competition of the Hockey Brewery Winter League. Scralenge and Dadandan were the first to play in the first round proper and it was the umpire’s failure to examine the new matchboard that caused the sensation.

Ralph Squirrel, employed through an agency, had been brought in at the last minute to replace ace caller Bert Sealey-Farquar due to Bert’s unfortunate accident with a hedge-trimmer. Unfortunately, Squirrel knew nothing about the game of darts. The agency had misheard the League’s request and had sent along not a darts caller but a dance caller. Not wishing to turn down the cash that was offered for his expertise at calling, Squirrel accepted the gig.

Both dart players had realised that the number 19 was defective and in fact inverted so it looked like ‘61’ but said nothing. The dartboard manufacturer’s error remained unnoticed by the crowd. Scralenge thudded his first dart (treble 61) into the board, then another, then double 61. Caller Squirrel, oblivious to all about him and blissfully unaware of what was happening, leant forward, counted the total and shouted ‘Four hundred and eighty eight – with a doe-see-doe!’ The crowd went mad. Smiling, Dadandan threw his first three darts and scored well, but in two more darts – single 6, double 3 – it was all over. Dadandan never got a look in.

But, as so often happens after such a special game, Scralenge’s performance deteriorated and Dadandan won the next two games with 122 out-shots – one dart on both occasions. Caller Squirrel’s attention was finally brought to the defective dartboard and a new matchboard installed. One onlooker commented, “At first I thought it was a new type of board. You know, like when that Quadro board was introduced a few years back. Whatever, it was a great, but very short match.”

With the agreement of all the other competitors, the Dan Dadandan/Matt Scralenge result was allowed to stand and Squirrel remained in charge. With the new dartboard in place, the competition continued. It was finally won by last year’s runner up, Eddie ‘Sniper’ Smith (Eagle and Beagle, North Alberton) who impressed the crowd with a 3-1 win over doubles partner Billy Truro (Duck and Dodger, Tripperton), winning his final game with a single dart 162 out-shot (double 81).

A subsequent internal enquiry by Hockey Brewery Winter League officials revealed that the dartboard supplier had been changed without committee approval by a committee member ‘in order to save money’ and that the entire order (12 dartboards) all had defects of some kind. The worst one had no doubles and all the numbers were 3’s. The committee member concerned has since resigned – and how now joined the local badminton team – and a more reputable dartboard supplier secured for the summer league.

Peter Squirrel is unlikely to work as a darts caller ever again – not that he wanted to in the first place.

(with a retraction at midday).