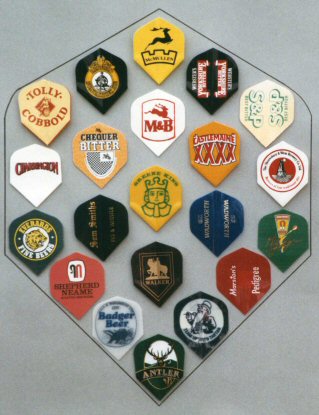 In 1985, in one of my very early attempts to trace the real history of the game of darts, I sent a questionnaire to every single brewer in Britain listed in that year’s Good Beer Guide (which included the national giants) asking what, if anything, their archives might reveal.

Recorded facts on the early days of darts were scarce and, at that time, I was hoping that someone within the brewing industry held the key. Unfortunately, I was to discover that the ‘key’, had it ever been in a brewers’ possession, had been thrown away a long time ago. However, the responses to my questionnaire sent my research off down another alley; one I had not really given much consideration to at all up to that point.

One of my questions to the brewers was ‘If you currently produce promotional flights could I have a set to illustrate my thesis?’ and, without exception, wherever possible, the brewers obliged. About 60% of respondents confirmed that they were supporting darts and darts players in some way, from supporting a full league structure to provision of promotional dartboards, dart mats and flights. (When I undertook a similar survey in 1995, that percentage had fallen to under 35%.)

Having received so many dart flights through the post, it seemed a pity for them to languish in a desk drawer so a friend, Ian Hughes and I decided to design a ‘Flight of Flights’. As Ian’s photograph (below) shows, we took a standard dart flight shape and filled it with a selection of those flights received from brewers during 1986. The original version of this article and the photo of what we called ‘The Flight of Flights’ were first published in November 1988 in Darts Player 89.

As ‘The Flight of Flights’ was being constructed, I wondered if there was a specific word for ‘dart flight collectors’. After all, stamp collectors have a proper name – ‘philatelists’ – so why not collectors of darts flights? After much digging I discovered that there was no such epithet. Undeterred, I wrote to the Queen’s English Society (QES) and requested their help.

In July 1988, J. W. Clifton of the QES, a man who admitted that he ‘reveled in word-coinage’, came up with a word for me constructed from ‘belos’ meaning ‘dart’, ‘pteros’ meaning ‘flight’ and the suffix ‘philist’ meaning ‘collector’. Thus a new word was born: ‘belopterophilist’ – a darts flight collector – and this was revealed exclusively to darts fans across the world Darts Player 89..

In a tag line to the original article I hoped that ‘The Flight of Flights’ would ‘be appreciated by dart flight collectors all over the world’; my not knowing if in fact there were any such collectors on the planet. However, I need not have worried. Shortly after Darts Player 89 was published I was contacted by collectors from Belgium, Germany and South Africa. They were all keen to share their enthusiasm for dart flight collecting with me and, as proof, sent me envelopes full of ‘swaps’.

Although,more than twenty years on, I have lost touch with most of them, or they may have merely moved on to something else, I recall their names; Freddy Olievier of Belgium, Wilfried Hinsch of Germany (where a flight collector was called a ‘flights-sammler’) and Michael Everton of South Africa. Freddy Olievier was a prodigious and formidable collector of dart flights.

When Freddy first contacted me in early 1989 he told me he was a ‘construction builder’, and admitted to having ‘6,622 different pieces’, kept in twenty-two books and he professed to own ‘the greatest collection of dart flights in the whole world.’ Up until that time Freddy had exchanged flights with contacts in Australia, Belgium, Canada, Denmark and West Germany. By the time the photo accompanying this article was taken in 1996 Freddy had accumulated over 20,000 different flights. One year earlier Freddy’s massive collection was recognised by Fred H. Holmes, author of Electronic (Soft-Tip) Darts: The American Dart Revolution, (Dallas: Lone Star Publications, 1995).

‘Flights come in thousands of designs, from plain colors to risqué and wild designs. In Belgium there is a fellow called Flight Collector Freddy Oliver [sic] who has collected over 20,000 flights.’

Through an issue of my monthly Dr. Darts’ Newsletter in 2011, when I mentioned dart flight collecting and Freddy, one of my subscribers contacted me and then put me back in touch with Freddy after a break of many years. Freddy told me that his collection exceeded 30,000 items but, for personal reasons, he no longer collected flights and would consider any sensible offers for his collection.

As for me, well, back in 1988/89 I was caught up and driven along by the enthusiasm of others (Freddy, Wilfried and Michael) and now have four albums full of flights. However, they number hundreds, not thousands so I will remain a mere ‘darts flight collector’ never collecting to the extent of the serious belopterophilist!

So many years have passed since my first contact with Freddy, Wilfried and Michael. I lost touch with Wilfried some years ago and do not know if he remains a collector. Michael Everton recently restablished contact.

As for Freddy, having mentioned that he was open to offers for his massive collection back in 2012 and, presumably, having received no formal bids, announced in 2017 that his collection, which by then comprised of between 20,000 and 30,000 different items including feather flights, personalised flights (Lowe, Bristow, etc.) and modern flights was again up for sale. Freddy told me, “I started in March 1979 and stopped about ten years ago because the interest faded, lack of time.”

I promoted Freddy’s collection in the August 2017 issue of my global Dr. Darts’ Newsletter (DDN) but have heard no more from Freddy. Whatever happened, I trust that his massive flight collection is now is safe hands elsewhere.