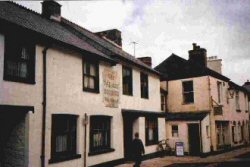 Whilst on holiday back in September 2000 in the county of Devon, England, I visited the town of Buckfastleigh and there chanced upon a ‘dead’ public house known as The Valiant Soldier, now a museum. Situated in Fore Street in this ancient woollen town The Valiant Soldier is known as “the pub where time was never called …”

When the pub closed during the 1960’s the landlord and landlady went upstairs and lived there for the rest of their lives.

The pub below was simply frozen in time, frozen that is until it was “rediscovered” a few years ago. For once common sense took a hold and arrangements were made for the pub to be preserved for posterity under the auspices of the Buckfastleigh Trust and under the day-to-day care and attention of the museum’s curator, Kate Johnson, and her team.

In the public bar dominoes abandoned in the 1960s rest on a polished hardwood table awaiting completion of the game. In the corner stands the dartboard in a strong wooden cabinet, three French darts sticking out of the board as if thrown there by the last player before he wandered out into the darkness of Fore Street on that final day.

A small lamp positioned above the cabinet illuminates the dartboard; a “bristle” board dried out by time with the almost obligatory tyre surround. Atop the cabinet is a small “Gordon’s Gin” box containing, not gin, but the “house darts”, a random selection of tatty darts for use by players who haven’t brought their own arrows. (No self-respecting publican would ever put a decent set of darts out as the “house darts”. If he did, they were more or less guaranteed to ‘disappear’).

No hi-tech electronic scorers in those days of course but at The Valiant Soldier no chalk either. Below the dartboard can be seen a cardboard, wipe clean “Dart Scorer” and beneath that a shelf positioned to catch any “drop-outs”.

“Mac” never came back to collect his darts. The box bearing his name still sits on the shelf behind the bar with other boxes of customers’ personal darts. These include a number of Unicorn sets in the familiar green boxes of the time together with other sets manufactured by darts companies now long gone out of business.

So, in order to share just some of the artefacts with the visiting public, one of the first floor rooms has been converted – by blacking in the windows and entering through black curtains – into “The Attic”. Visitors step into total darkness and then view the contents as most of us would our own attic – with the help of torches. (A most effective idea.)

In the centre of the attic I espied a set of Unicorn “Silver Comet” darts which were first manufactured in the late 1930s. The “Silver Comet” was the foundation stone of Unicorn Products Ltd. Chrome plated, all metal (except for the flights) and featuring a patent screw-on cap on the stem to deflect following darts, the “Silver Comet” was a revolution in darts technology at the time, created by Unicorn’s founder, Frank Lowy.

Marketed originally through the Wisden sports company and then from 1939 by the newly formed Unicorn Products Ltd, the darts were sold boxed and – for the first time – in sets of three. These darts – now highly collectable – retailed in 1939 at an amazing 2s 6d per set, which was a great deal of money in those days.

Younger – and I use the word very loosely – darts enthusiasts, such as myself, will recall how expensive we all thought tungsten darts were when they first appeared in the 1970s. To see a set of “Silver Comets” in situ, in the pub – although in the attic – was a joy.

It appears that the last publicans of The Valiant Soldier failed to throw anything away. Wartime memorabilia and breweriana – stored up there before either word was ever coined – crowded the attic whilst elsewhere other “gems” were discovered. From a darts history point of view – as if the discovery of the “Silver Comet” darts was not enough – there was one more exciting find.

Researcher Patrick Chaplin in familiar pose at the Public Bar, which closed over 30 years ago.

A book containing details of the pubs’ darts teams results, both home and away, was discovered and has been preserved. A real piece of local history, of sports history, of darts history. I hope one day, with Kate’s permission, to be allowed to peruse the contents of this valuable artefact.

Kate Johnson and her team have come a long way since The Valiant Soldier was re-discovered. It is now protected as The Valiant Soldier Museum & Heritage Centre. Every single item in the building has to be recorded and numbered. In Kate’s workshop it was indeed strange to see a set of Unicorn darts, each of the three darts bearing an individual number on its stem – recorded, marked and safe.

I loved the place. I simply did not want to leave. I wanted to take the French darts out of the dartboard, step up to the hockey – as it was called and spelt in those days – and play the first game of darts in The Valiant Soldier for over 30 years. But that was not possible. To be honest I didn’t even ask. As an historian I appreciate the need to leave everything just as it was.

I drove out of Buckfastleigh and away into the Devon countryside feeling as though I had just experienced real history. I don’t know of any other way of putting it. In the Avonwick Inn nearby my wife Maureen suggested that, without doubt, I should write an article for Darts Player 2001 the moment I arrived home.

P.S: The Valiant Soldier doesn’t have a licence to sell alcohol but the local non-alcoholic ginger beer served there is excellent.