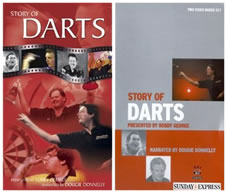 Those who know Journal Editor, Patrick Chaplin well, writes his old chum Derek Dobbs, will know about his fascination with the traditional pub game of darts – especially the practical side of the research!

Described as ‘an eccentric’ by The Guardian and ‘an arrers nut’ by The Sun, Patrick has been researching the history of the game for more than 15 years and in the late 1990s embarked on a PhD in the Social History of the sport at the Anglia Polytechnic University, Cambridge.

Despite the fact that he has yet to complete his PhD he is already regarded as ‘Doctor Darts’ by many in the darts industry. He writes regularly for Darts World magazine and his history articles feature in the programmes for the three major darts events organised by the Professional Darts Corporation, including the World Championships held at Purfleet. Patrick also has a darts history website (www.patrickchaplin.com) which, since November 2000, has been visited by over 28,000 darts fans.

Earlier this year he was approached by the production company Green Umbrella and asked to contribute to a groundbreaking video titled ‘THE STORY OF DARTS.’ Without hesitation Patrick agreed and filming took place on 14th August in his back garden. Patrick told The Journal, “It was a fabulous opportunity. From a purely personal point of view I hope that my involvement will enhance my reputation as the historian for the sport of darts.”

Produced exclusively for High Street retail giant W. H. Smith, the video is sponsored by the Sunday Express newspaper and supported by the British Darts Organisation. ‘The Story Of Darts’ has a running time of 140 minutes – surely that should be ‘one hundred and eiiiiiigggghhtttty’ – and is the most comprehensive ‘darts video ever produced and costs a mere £14.99. “The video is a giant leap towards improving the image of the game by establishing a real heritage for the sport” said Patrick. “The only downside is that, for whatever reason, the Professional Darts Corporation did not participate in the making of the video.”

Whatever the case, Patrick seems to have scored a bullseye this time!