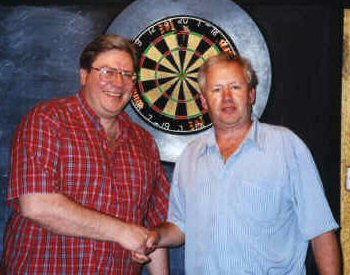 Winner of the News of the World in 1988/89, twice Embassy Finalist, twice World Master and with a string of other championship wins to his name, Dave Whitcombe slid quietly out of the darting public’s eye in the early 1990s. In this article, Darts Historian, Patrick Chaplin, tracks Dave down to his pub in Kent and learns that not only is Dave still playing but he’s also on the comeback trail.

Dave Whitcombe ‘on the oche’ looking forward to a return to Big Time darts Click Here for more info.

Dave Whitcombe deserves a place in the darts Hall of Fame. When he won the WINMAU World Masters in 1982 he had truly arrived. Starting as a 14-1 outsider he took out Eric Bristow and the two Australian dartsmasters, Kevin White and Terry O’Dea on his way to the Final where he met Scotland’s Jocky Wilson and beat him 2-1.

Three years later, in 1985, Dave was back and on this occasion his journey to the Final laid waste to the hopes of Bob Anderson, Mike Gregory, Dave Lee and Stephen Coveney. He met Northern Ireland’s Ray Farrell in the Final and beat him 3-0. Darts World described Dave’s performance as ‘a powerful demonstration of top class darts.’

Dave was born in Chatham, Kent on 27th June 1954 only son of Tony and Sheila Whitcombe. Dave’s parents used to enjoy darts and had a coiled paper dartboard at home that they played on occasionally with friends. Dave recalls that, at the age of about 11 or 12, he used to join in and generally ‘muck about’. It was at this early stage that he found hitting the 19 not that difficult.

After his schooling had finished Dave, aged 15, went to work at Chatham dockyard where he says ‘I bummed around making out I was an electrician.’ His formal title was ‘Apprentice Electrician’. As part of his hectic daily schedule Dave used to go to the pub every lunchtime and play darts. He recalls, “Graham Stone was a good local player and he always wanted to play me for a half pint because he saw me as a mug, an easy touch.” Dave was always up for the challenge but never won. After about a year of being beaten and forever paying for Graham’s beer, Dave made a life-changing decision. “I got that hacked off of losing, I went along to a local sports shop and got my own darts and started practising.” Dave practised and practised and became a better and better player. However, Dave admits that Stone left the area “before I could nail him.”

By the age of 18 Dave was playing for the Old Lord Raglan, Chatham, playing on the Kent Doubles board. When he was 20 years old he was picked to play for Kent. At that time the best Kent county dart players were George Simmons, Tony Brown and Lew Walker. However, the two local players that Dave admired most were Ben Martin and Chic Love, two local players from the Chatham/Medway area. Dave says they were both ‘mustard’ on the Kent doubles board and regularly finished games with 100+ out-shots.

The reason was clear. Earlier that year, a friend, Graham Parker, had invited Dave up to the Windmill in Cricklewood for a darts competition, which Dave won. The following Sunday he played in another competition and won again. Dave told me, “I found that I could earn up to two weeks wages on a weekend. I asked myself “What the hell am I going to work for?” I was always skipping off work and mum went ape when I told her and then things came to a head. Dad had no problem with it but told me, “You must give mother housekeeping. If you fail to do that – give up the darts.”” Dave agreed.

The move from playing on the regional Kent Board to the standard trebles board did not faze Dave at all and soon, that same year, he won his first ‘major’, the inaugural Surrey Open. Dave was on a roll and won the Surrey Open again 1977 (there was no competition in 1976) and 1978, then the Suffolk Open in 1978. He was also runner-up in the Nodor British Open of 1975, reached the last four of the British Open in London in 1979 and in 1980 at last pinned his name to a national trophy when he and Tony Sontag won the British Open pairs.

In The Guinness Book of Darts (1981) Derek Brown recorded that at that time Dave had been ‘man-of-the-match’ fives times consecutively for Kent and that that level of form had established him in the England team, ‘where he quickly hit a winning streak.’ Derek added, ‘He has a contented look, but always fights hard to win as he did in the Marlboro Masters of 1980.’ Perhaps it was this style and persistence that was admired by the up-and-coming Phil Taylor who last year cited Dave as one of his idols. In his autobiography ‘The Power’ Phil wrote, ‘My favourite was Dave Whitcombe: good-natured, lovely thrower, equable temperament.’

Dave’s career went from strength to strength. His personal ambitions were to play for England and to win the News of the World and he achieved both. Of his News of the World win in 1988/89 at the Hammersmith Odeon, Dave reckons he had the hardest draw ever. It was tough. Dave, qualifying as the Eastern Counties Divisional winner had already beaten Keith Deller and then in the Grand Finals beat Denis Ovens (London & Home Counties Divisional winner) 2-0, Jocky Wilson (North of England) 2-1 and Arnie Bunn (Midlands) 2-0 and then Dennis Priestley (Yorkshire) 2-1 in the Final.

Dave recalls, “I lost the toss in the decider and Dennis hit 140.” Dennis was looking at a 64 out-shot with his sixteenth dart with Dave waiting on 40 after already missing a finish on 56. Dennis missed the 64 and then Dave finished on double 5 with the last of his three darts. Dave’s prize was £8,000 and a two-week Caribbean holiday, whilst Dennis had to content himself with £1,750 plus a gallon of Morgan’s Rum.

Dave, who played out of his own pub, the King’s Head, Ipswich also received two sets of silver News of the World darts; one set for winning the Divisional Final and the other for winning the Grand Final. Dave told me, “Usually the winner gets to keep the dartboard too”, but in Dave’s case it was not to be. Dave said “Some ******* had stolen it before I could collect it and take it home.” Dave believes that his success in the News of the World is unique. He believes that he is the only pub landlord to win that Championship.

By the time of the ‘split’ in 1993, and despite continuing success and approaches from the World Darts Council (WDC) for him to join, Dave was becoming disillusioned with the sport of darts. He told me “I gave up due to an accumulation of things. One was when John Lowe, Cliff Lazerenko, Tony Brown and I started the World Professional Dart Players’ Association which was formed to help the BDO and establish more tournaments.” The formation of this Association led to a number of difficulties for Dave – and other professionals. In Dave’s case it took a few altercations with officialdom for him to make up his mind to quit the sport.

But Dave has never quit darts absolutely and what of these rumours that he’s making a comeback and wants to be part of the ‘Big Time’ again? Dave told me, “I’ve always played for a local team and then three years ago I started playing serious again.” Dave rejoined the Professional Dart Players Association last year. Back on the pro circuit, all was looking good for his return. Then a major complication occurred. Dave said, “One day as I was playing darts, I had a pain in my elbow which got worse. I played in the Eastbourne Open and was in terrible pain.” The doctor diagnosed tennis elbow – Or should that strictly be ‘darters elbow’? – and Dave enquired of the medic how long the treatment would take. The doctor told him “About a year.”

With the tennis elbow sorted, Dave played again until he suddenly noticed that one of his fingers was actually out of shape. A further medical examination revealed that there was a large cell tumour on his right index finger. This was operated on at East Grinstead Hospital in May 2004 and Dave told me, “I’m now playing again but the numbness is expected to stay for six months to a year.” Once this is sorted Dave is planning to go to more tournaments but at present, as Dave says, he is “just playing at it.”

Today Dave lives with his wife Delphine at the Gore Court Arms, Sittingbourne, Kent; the pub which they own. Delphine and Dave run the pub as a real partnership and Delphine is very much behind the resurgence of Dave Whitcombe the professional dart player and supports him all the way.

As for any remaining ambitions, Dave has an idea to create a room filled with examples of the darts used by all the past and present big names in the game and called simply ‘Darts of Heroes’. In addition, Dave would like to write another book. Dave’s first book ‘How to Play Darts’ was published in 1981 and he always promised himself that another would follow. He told me, “That first book took me about a fortnight to write – three weeks tops – and it was OK.” His new book will be different, a “comedy book with a darts theme with real characters and one which would also tell the truth.”

Dave, we look forward to the book and more especially to your return to the top flight.